skip to main | skip to sidebar

Today we celebrate the life and contributions of St. Marcellin Champagnat, Founder of the Marist Brothers.  It's amazing how his simple faith and deep humility helped him overcome odds we would deem "unfair" today and has placed him in a spotlight as a "super hero",. which he would gladly deny and shun.  He would be the first to say, it was not he, but Mary using his open and willing heart to devise a way that would ensure the prominence of her Son, Jesus, as THE MAN to come to know and love. We continue to do so today through our schools and other works among those most in need. It is encouraging to know that no matter what gifts God has given us, they can be used to serve him and lead others to him. We pray that we may put our trust more and more in Jesus through Mary and St. Joseph, who also played a major part in raising Jesus from infancy to manhood, turning our lives, talents and unique gifts in service to others, particularly, "the least favored.".  St. Marcellin, Champagnat.  Pray for us!
Bro. Rene
Posted by Bro. Rene D. Roy, FMS at 8:39 AM No comments:

Although born in England and baptized Winfrid, St; Boniface is known as "The Apostle of Germany: and  looked upon as the Englishman who has had the most influence in Europe. Ordained at 30, he had a desire to be a missionary and despite an aborted first attempt, returned under the commission of Pope Gregory VII and with a new name, Boniface, returned to what is now the Netherlands and proceeded further north into Germany where he made many converts, and founded schools and monasteries. His cutting down of the "sacred oak" without harm to himself convinced people that he was a man to whom they should pay attention. He was murdered at the age of 73 as he prepared to confirm a group of believers.
Although we'd like to have the benefit of outstanding prodigies to accompany our efforts to live a productive life like that of Boniface, we share his simple faith and can follow his example of determination in our own every-day lives.  We don't have to cut down a sacred oak, but our goodness and humility can be more effective than we imagine.  May God work through us!
Bro. Rene
Posted by Bro. Rene D. Roy, FMS at 9:18 AM No comments:

When one of the Scribes asked Jesus which was the first of all the commandments, Jesus replied to love God alone with all of one's heart, soul, mind and strength...and to love neighbor as oneself. A compact and neat formula, but the template for a lifetime's efforts. (Cf. Mk 12: 28-29). To love with all one's being demands inner strength and a depth of commitment that stems from the core of our being.  It does not flinch when challenged or faced with discouragement, doubt or weariness.  It overcomes these, being the strongest force we know, for it flows from the essence of God.  It is not just an abstraction nor a fantasy, but a reality that moves us to give all for the sake of "the other."
The pandemic brought love out of us all in ways we never before imagined, and yet, simultaneously, the effect of the absence of love have come forward in frightening ways in the racism, violence, burnings, shootings, lootings and riots we have seen across the nation and world. We hope and believe that the power of this first and greatest of commandments will prevail.  Each one of us in our little corner of the world needs to take this commandment seriously and put it into action.
Bro. Rene
Posted by Bro. Rene D. Roy, FMS at 8:58 AM No comments:

The Church celebrates the martyrdom of St. Charles Lwanga and 21 other young Ugandans in the 1880's who stood up against their king rather than sacrifice their faith. They stand today as models of a simple, steadfast faith.when we are confronted  with brutality, violence, injustice and blatant hatred, just as they were.  They were marched to a place of execution and burned to death in bundles of dry branches, a painfully excruciating death but a small price for the love of a  God they had just recently come to know.
St. Paul wrote to Timothy:  "I remind you to stir into flame the gift of God that you have through the imposition of my hands.  For God did not give us a spirit of cowardice, but rather of power and love and self-control.....He saved us and called us to a holy life, not according to our works but according to his own design and the grace bestowed on us in Christ Jesus before time began...." (2 Tim 1: 6,7,9)
The young Ugandan Christians lived these words and by their witness teach them to us. It was not their efforts alone, but the power of Christ working in them. May we have ears to hear and hearts to follow the grace of Christ working in us.
Bro. Rene
Posted by Bro. Rene D. Roy, FMS at 9:38 AM No comments:

In their attempt to "trap" Jesus, the Pharisees took a big risk when they asked him about paying the Roman tax,  If he said, yes, he would be supporting the foreign oppressors; if no, he would be in violation of the law.  Jesus effectively avoided the dilemma, asking for a coin, which surprisingly the Pharisees produced, and pointing to the image on the coin, told them to "Render to Caesare what was his, and to God, what was his.(Mk 12: 17)
Raising this to a spiritual level, we might ask whose image is on the coin of our souls, and admitting, "God's image", then our task is to give to God all that he has given us. which is plenty, from family to faith, to health, friends, talents, and gifts...When we look at all this, we cannot but be overwhelmed.  What small price to return these gifts to God by sharing them lavishly with others as he has done with us?
Bro. Rene
Posted by Bro. Rene D. Roy, FMS at 9:18 AM No comments:

Mary, Mother of the Church

Two years ago, Pope Francis inserted an optional Memorial to the Blessed Virgin Mary, Mother of the Church, into the Church calendar on the Monday after Pentecost. This is most appropriate, for it was the union of Mary and the Holy Spirit that brought forth the Incarnation of the Son of God, Jesus, into the world.  When Jesus gave Mary to the beloved disciple, John, at the foot of the cross, he gave her to us as well.  She was present with the Apostles gathered in the upper room in the interim between the Ascension and Pentecost,  and remained with them in prayer as they began their mission to evangelize the world.
We as Marists have the special role of modeling the love, compassion and maternal qualities of Mary to replace the often misrepresentated image of the Church as legalistic, institutional, and sometimes harsh and cruel, as in the days of the Inquisition.We are called not only to make Jesus known and loved but also to put a maternal face on the Church, to make her more loving, tender and welcoming to all, as Jesus turned no one away. St. Theresa of Lisieux said that “The loveliest masterpiece of the heart of God is the heart of a mother”.  The  Blessed Virgin Mary, Mother of the Church,  reflects that heart, invites us to reflect it as well, as we seek imitate her motherly gifts and qualities.
Bro. Rene
Posted by Bro. Rene D. Roy, FMS at 9:04 AM No comments:

The Great Solemnity of Pentecost brings us to the climax of a cycle which began on Good Friday, and continued through Easter, the 40 days, The Ascension, and now, Pentecost.  We cannot fathom the depth of this feast, for at it is the heart of God's indescribable love for us. So great is that love, that he sends us forth, fortified by the Holy Spirit, with the mission of continuing the presence and work of Jesus in our world. A formidable task as the headlines of chaos and violence these past few days demonstrate.  The Power of the Holy Spirit is the only force which can subdue the power of Evil, and we must be the instruments of God to accomplish this. When the tongues of fire appeared over the gathered Apostles, they lost all fear, flung open the doors, preached dramatically and emphatically, and on this day converted thousands.  Come, Holy Spirit, enable us to do what seems impossible!
Bro. Rene
Posted by Bro. Rene D. Roy, FMS at 9:43 AM No comments: 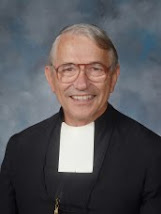 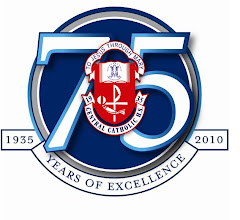